The Road To Mandalay

The Road to Mandalay

If you’ve ‘eard the East a-callin’, you won’t never ‘eed naught else. No! you won’t ‘eed nothin’ else. But them spicy garlic smells, An’ the sunshine an’ the palm-trees an’ the tinkly temple-bells; On the road to Mandalay…Mandalay (1890), Rudyard Kipling

Kipling’s ‘road’ to Mandalay refers to the Irrawaddy River, in the days when British troops stationed in Burma were taken up or down the river in paddle steamers. My road to Mandalay was a little different. Arriving into Mandalay International Airport on Air KBZ flight K7244 on a Saturday morning, after a 1hr 25-minute flight from Yangon, I was met by my new guide and driver and taken by road in the back of a minibus to our first stop of the day – Sagaing, a former Myanmar capital, around 20km south-west of Mandalay.

I love the feeling of anticipation before seeing a sight for the first time that you’ve only ever read about. It’s one of the reasons I travel. And crossing the Irrawaddy River into Sagaing over the Inwa Bridge gave me my first glimpse of this legendary waterway. The vast muddy waters of Myanmar’s most important commercial river, glistening through the morning haze, didn’t disappoint.

Sagaing Hill, a crest of green hills studded with hundreds of white and gold pagodas, monasteries and nunneries, is widely regarded as the religious centre of Burma. It’s home to some 6,000 monks and nuns.

With just a short time on Sagaing Hill I visited the two most popular of the myriad of pagodas;

Two-thirds of the way up the hill is U Min Thonze, also known as the cave temple. It’s a crescent-shaped indent carved into rock housing a row of 45 seated Buddha images. Each image is unique in size & facial expression with one for each year in the life of Siddharta Gautama’s time as Buddha. The interior is quite beautiful. Very light and airy for a ‘cave’, largely due to the twinkling green mosaic walls.

Soon U Ponya Shin is one of the oldest temples on Sagaing Hill and has wonderful panoramas of the pagoda-decorated hills, with the Irrawaddy River beyond. For locals, this is the most prestigious spot on the hill. A giant statue of Buddha dominates one end of the temple, set amid shimmering turquoise wall tiles. When I visited, the temple’s interior was undergoing renovation with fresh gold leaf being intricately applied inside the main prayer hall.

Across the river from Sagaing (on the confluence of the Irrawaddy and Myitnge rivers) lies another former capital, Inwa, or Ava as it was previously known. To get there we headed back over the Inwa bridge and took a dirt road down to the Myitnge river. From there it’s just a short ferry ride across to the former capital site. The rickety motor boats leave around every half hour and take a dozen or so passengers, plus the odd motorcycle… just ride onto the front of the boat and one of the helpful boatsmen will ensure you don’t overshoot and end up in the river!

The boat chugs gently, but noisily, across to the other side of the river. As soon as you set foot on Inwa soil you’re confronted by a gaggle of souvenir vendors, who’ve been eyeing you up from the shoreline as the ferry approaches their home ground. I always enjoy a bit of banter with these characters. The young girl I spoke with was a really bright young thing who spoke perfect English, and German as well! She was obviously a really intelligent girl who under different circumstances and background would no doubt have a very different vocation.

Beyond the vendors, your transport awaits (assuming you’re not on 2-wheels). The Burmese still use the horse-cart as a means of transport in many parts of the country. And here you get to sample this traditional means of transport for your ride around the temples. It’s another of those step back in time experiences.

Just a short video below of my ride through the riverside horse-cart station, sitting up front alongside the driver. Not the most comfortable of rides. I’m not sure who was worse off, me or my guide bouncing around in the back!

Along with Mandalay, Inwa (aka Ava) is probably Myanmar’s most famous old capital. In fact, Burma was known as Ava by Europeans before the British colonized the region. This ancient city served as the nation’s capital for nearly 360 years, on five separate occasions from the 14th to the 19th centuries, until a series of major earthquakes in March 1839 destroyed almost the entire city. What’s left is a small island of rustic charm and rural beauty with tree-lined avenues and dotted with the ruins of religious structures leftover from its reigns as the country’s capital.

The 15th-century Yedanasimi Pagoda lies within a green patchwork of paddy fields and is a small but pleasant collection of three sitting Buddhas set amid crumbling brick stupas. It’s a lovely calm and tranquil area wonderfully evocative of those ancient times.

The elegant teak Bagaya Monastery built in the 1700’s is supported on 267 teak posts. The stained and elaborately inscribed teakwood structure houses a cool and dark prayer hall within. It’s an incredibly peaceful space that’s beautifully atmospheric as the light shines through the small windows and light grills from above. A gentle breeze flows through the hall making this a cool and relaxing respite from the soaring temperatures outside. Beneath the monastery, you can wander amongst the supporting pillars. The play with light and shadow continues here as the sunlight shines through the rickety uneven floorboards above. Word of warning; as you walk around on those floorboards beware the protruding nails!

The world’s longest teak footbridge, the iconic U Bein Bridge spans 1.2 km across the Taungthaman Lake in Amarapura, Myanmar’s penultimate royal capital. The bridge was constructed around 1850 using over 1,000 teak posts reclaimed from the former royal palace in Inwa following that city’s demise as capital.

I was filled with anticipation again as we journeyed towards this now famous landmark. The image of the U Bein Bridge has been etched in my mind ever since reading Amitav Ghosh’s The Glass Palace (one of my favourite novels) almost 20 years ago. The bridge is pictured on the front cover of the book invoking a romantic image of days gone by in a far-off land. Visiting it was quite special for me. So it was weird to see that this romanticised image that’s been carved into my subconscious for so many years has now become a major tourist attraction and one of Myanmar’s most photographed sites.

The area around the bridge is a busy place, full of sightseers and souvenir sellers. A steady and constant stream of tourists ambles across the bridge taking selfies at strategic points. It’s not quite the image I was expecting. But the bridge is still used as an important passageway for the local people and the area around it is vibrant with local life; kids on bikes park up below and use it as a cool hangout, groups of men play Chinlone (the national sport of Myanmar) keeping a cane ball from hitting the ground, and fishermen go about their daily work. This unique expanse of teak spindles still has a decaying charm of its own though. I’m glad I got to finally see it. 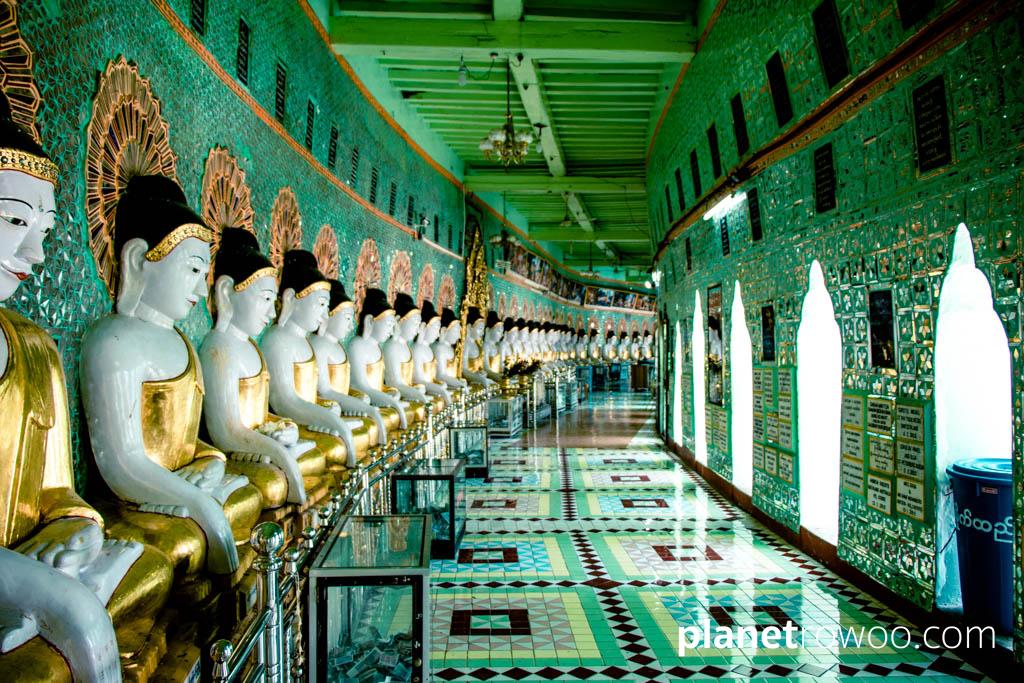 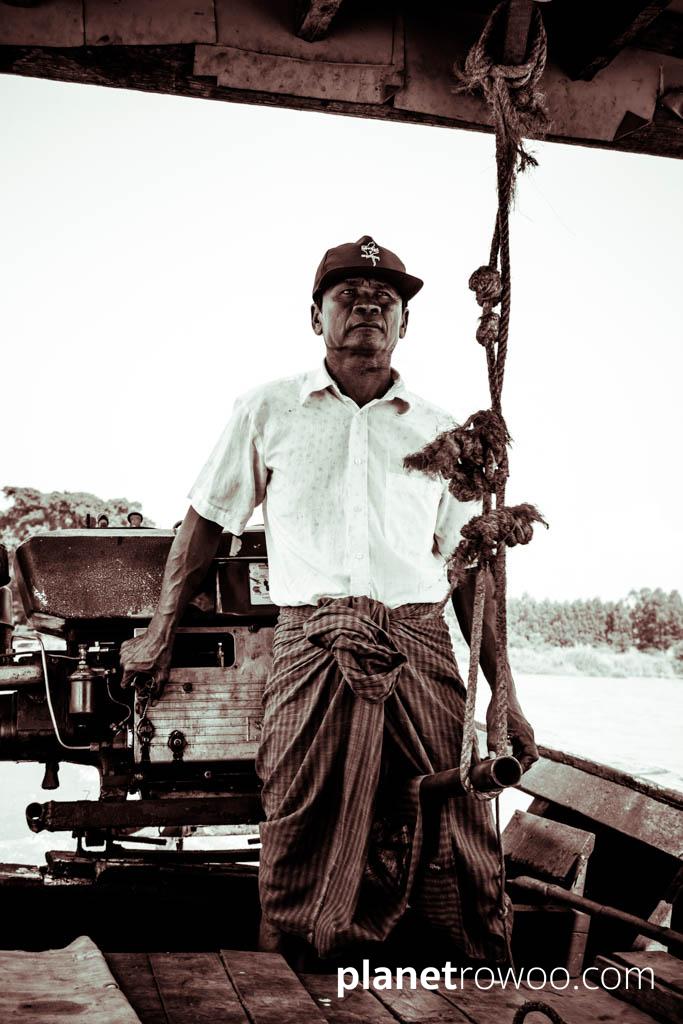 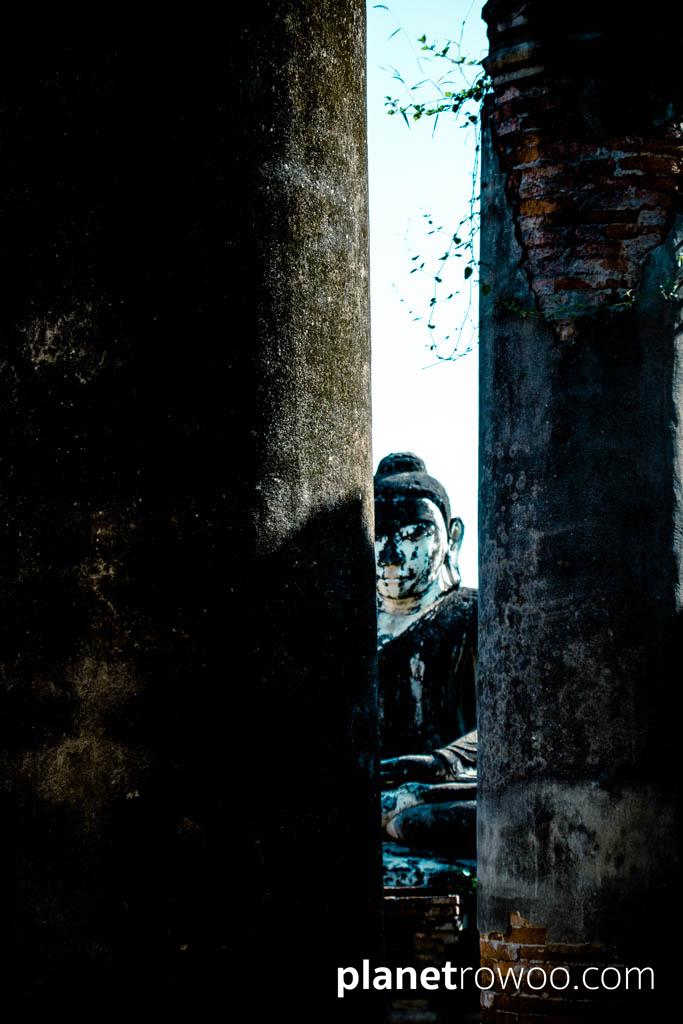 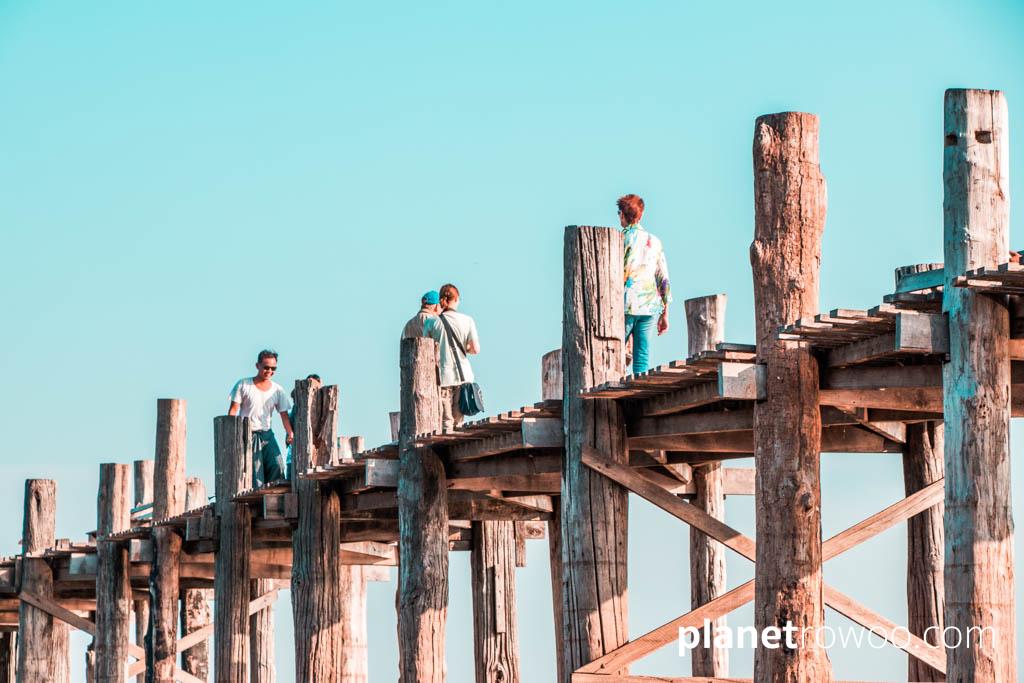 End of the Road

After my flight from Yangon, and a pleasant but long day of sightseeing around the neighbouring religious centres and ancient capitals, I was finally taken to my hotel in Mandalay city… the Hotel Queen Mandalay, where I would spend the next few nights. My road to Mandalay had been an enlightening one.

For more on my stay in Mandalay, check out my next two blogs;

Top Image: Buddha image through the ruins at Yedanasimi Pagoda