On this page:
> The Bagan Temples
> Shwezigon Pagoda
> Htilominlo Temple
> Ananda Temple
> Taung Guni Temple (South Guni)
> Galleries
> Up Up And Away (Wot No Balloon?)

A gilded city, alive with tinkling bells and the swishing sounds of monks’ robes… the towers are built of fine stone, and one has been covered with gold a finger thick… they make one of the finest sights in the worldMarco Polo

Lying south-west of Mandalay on the eastern banks of the Irrawaddy River and once the capital of a powerful ancient kingdom, Bagan is one of Myanmar’s main attractions.  The Bagan temples are contained within an area known as the Bagan Archaeological Zone. With thousands of Buddhist monuments spread over 26 square miles of green plains, it has the largest and densest concentration of Buddhist temples, pagodas and ruins in the world. This vast archaeological zone is widely regarded as a sight to rival that of Angkor in Cambodia.

Arriving into Nyaung U airport, the gateway to the Bagan region, on the morning flight from Mandalay, I was quickly met by my guide at arrivals and whisked off for a day of sightseeing in and around Bagan. My man flu was now in full flow, with a streaming nose and a thick head. But the friendly welcome from my pretty guide and her enthusiasm for the sights and history of the region helped to take my mind off my pitiful cold. I was ready to take on the Bagan Temples.

Bagan has suffered several earthquakes over the centuries. The most recent, in August 2016, damaged 400 temples and work on repairing them is ongoing. Scaffolding is visible on many monuments, but most of the major temples remain open to the public.

With just a day available with my guide there was only time to scratch the surface of this huge historical site. So we embarked on an itinerary which took in a few of the most significant temples around the banks of the Irrawaddy.

The Shwezigon Pagoda is one of the oldest monuments of Bagan. Its huge gold plated bell-shaped stupa has been replicated many times across numerous temples over the centuries. Built to enshrine one of the four replicas of the Buddha tooth in Kandy, Sri Lanka, it’s become an important pilgrimage site for Buddhists. Remnants of enamelled plaques in panels around the base of the pagoda illustrate scenes from the previous lives of the Buddha – known as the 550 Jatakas. At the main entrance gate is an enormous white mythological lion standing guard.

A long covered walkway leads from the pagoda. With market vendors selling a multitude of wares, it’s a colourful and atmospheric walkway. It makes for a very pleasant stroll before or after you visit the main temple grounds.

Htilominlo is one of the largest temples in Bagan. Built of brick, it was originally plastered with white stucco, containing depictions of ogresses and mythological animals. Only fragments of the original fine plaster carvings now remain. But this gives the temple its character. It’s a pleasant challenge to try to piece together the remnants in your mind and imagine how it once looked.

At the top of the temple the ornamental tower, or sikhara, originates in style from Northern India (it’s similar to that of the Ananda, but not gilded or as well preserved). At the time of my visit, the sikhara was undergoing renovation work. As well as other parts of the exterior. But this didn’t detract from the experience.

Inside the temple are four large gilded Buddha images, set amid atmospheric chambers and reached via brick archways and stairwells. Outside, around the temple, it’s a colourful sight. With busy souvenir stalls selling local handicrafts, some run by Long Neck Karen hill tribe women.

An architectural masterpiece and one of Bagan’s best known and most beautiful temples. The Ananda has been titled the “Westminster Abbey of Burma”. The Ananda’s most distinctive feature is the gilded sikhara, the tower like spire on top of the pagoda. The reflection of this gilded tower is visible from miles away over the Bagan plains. Its architectural style originates from Northern India. Legend has it in the 11th century eight monks from India visited Bagan and described a legendary cave temple in the Himalaya mountains to the then Burmese King who wanted to recreate it. Once completed, the King had the architects executed, to make sure anything like it could never be built again.

In the centre of the Ananda Pagoda in arched recesses are four teak wooden gilded Buddha images. Each image is 9½ meters tall and face directions from north to south. They represent the four previous Buddhas that have reached nirvana; Kassapa Buddha (south), Kakusandha Buddha (north), Konagamana Buddha (east) and Gautama Buddha (west). The Gautama Buddha, the most recent Buddha who lived 2,500 years ago is in the Abhaya Mudra pose, which expresses fearlessness. The expression on the face of the Kassapa image appears to change when viewed from different distances (apparently, although it didn’t quite work for me!).

My final stop of the day was a visit to the upper terrace of the Taung Guni temple to enjoy a sunset over the Bagan plains. Sadly, although the views are impressive, the sunset didn’t really materialise. But after a busy day of exploring the temples, it was a pleasant way to spend half an hour. Just sitting with the small crowd, chatting and waiting in anticipation as the sun went down. 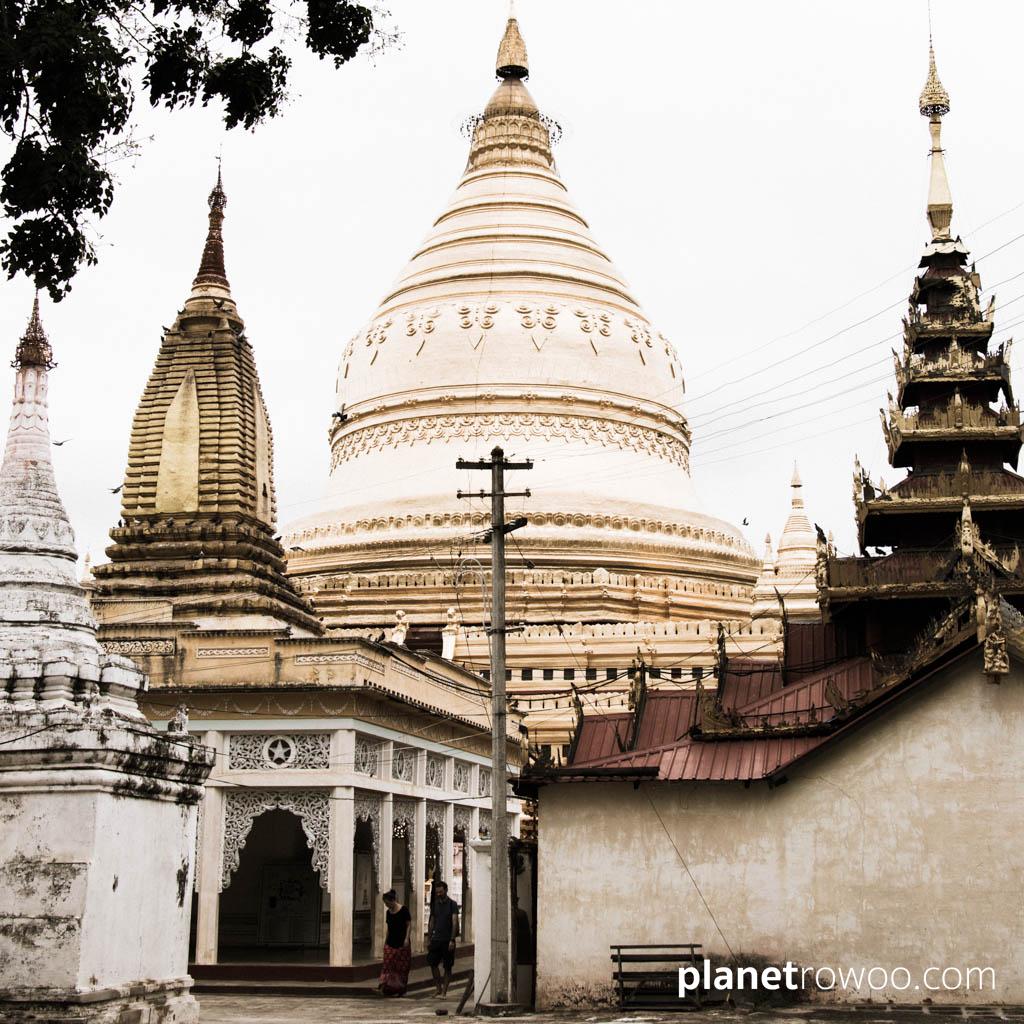 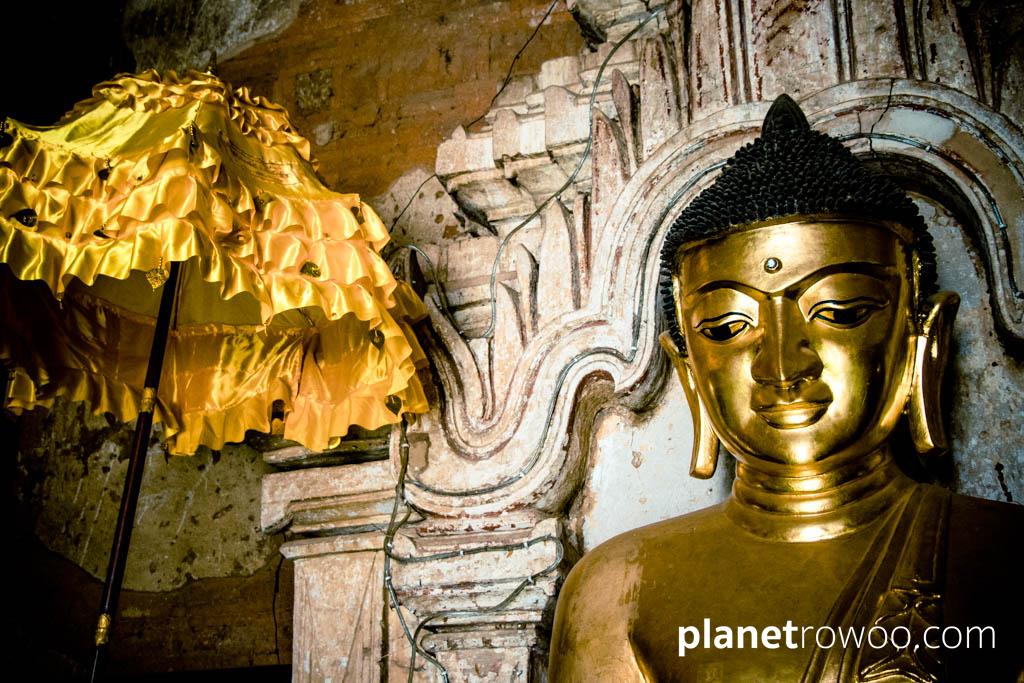 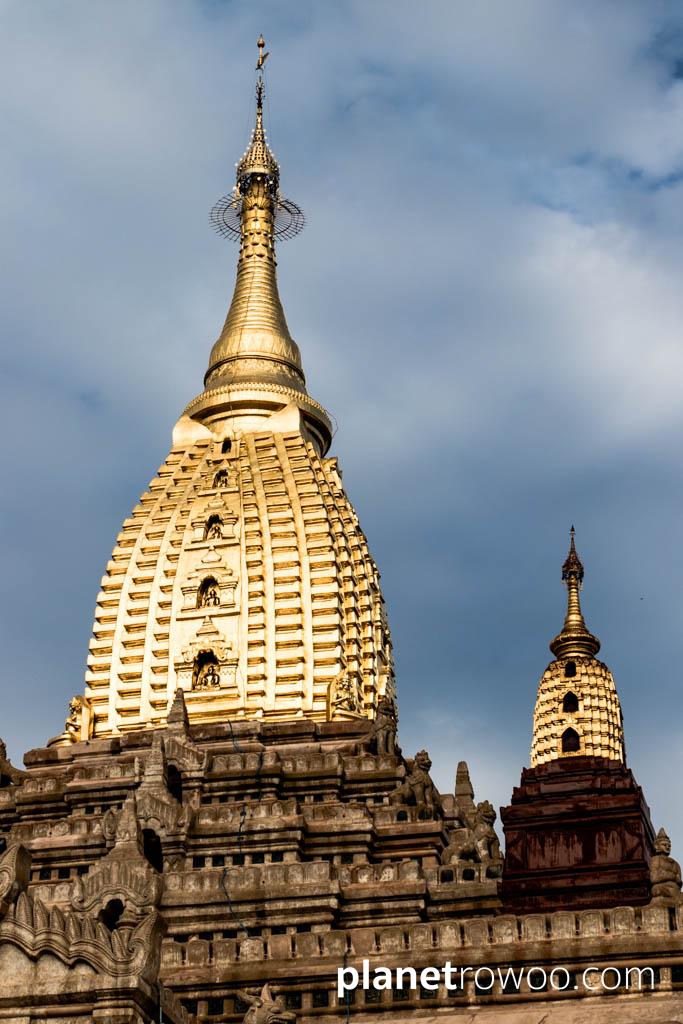 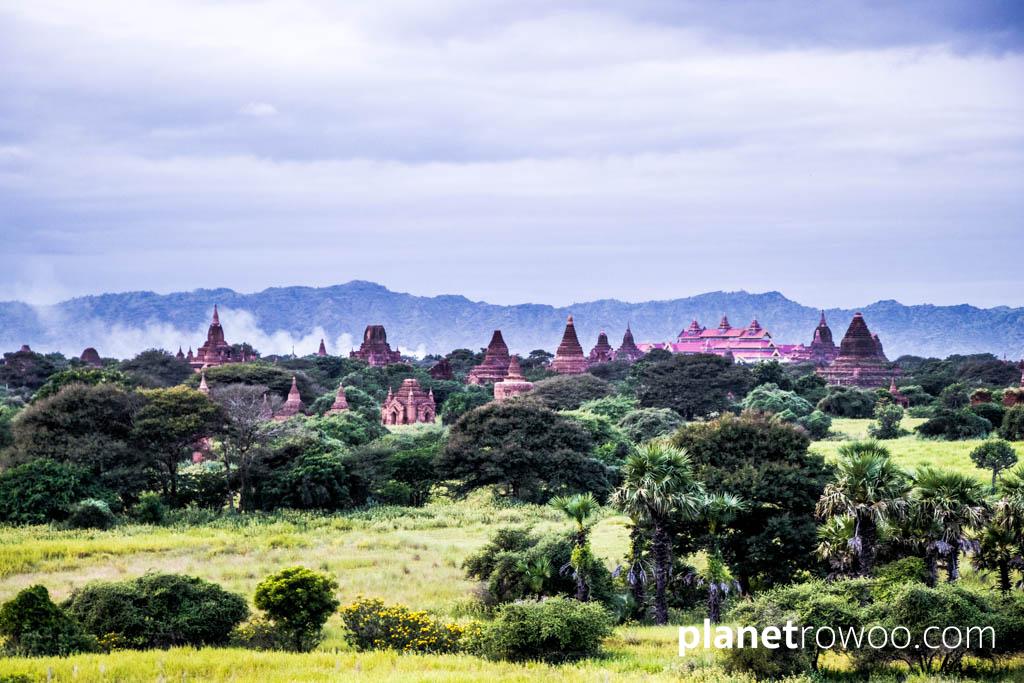 Up up and away (wot no balloon?)

One of the best ways to see the temples is by balloon. Sunrise or sunset hot air balloon rides over the Bagan plains are extremely popular. So popular in fact that there was no availability when I tried to book a ride with my tour several weeks before. And being a little under the weather I didn’t investigate the possibility of getting a standby ticket once I’d arrived in Bagan.

The closest I got to a balloon was sitting on the neighbouring table at breakfast to a group of balloon operators who were staying at my hotel! But it’s definitely on my list for my next visit.